UNBEARABLE: Mother-of-four Cassandra Wood lives in a house that is literally falling apart, making her fear for her family’s safety. Picture: Kenji Sato

Residents living in derelict social housing say they have been forgotten despite their desperate pleas for help.

Occupants have described feeling trapped in dangerous conditions in their dilapidated homes even after begging the NSW government for assistance.

It comes as Wagga charity workers warn more needs to be done to build new social housing and improve the “soul destroying” state many of the current homes are in.

Ashmont resident Cassandra Wood, 32, fears for her children’s safety in their home on Buna Street, which she said was sinking into the ground and riddled with white ant damage and toxic mould.

Ms Wood, a single mother-of-four, said her whole family had to sleep in the living room because the front of the house was collapsing.

“I’m under mental stress from it. I can’t even sleep at night because every creak and groan makes me think the wall’s falling. It’s something that really worries me,” she said. One of the Bruce Street units that was torched on Tuesday. Picture: Kenji Sato

She said her asthmatic daughter was recently hospitalised with fever and swollen glands, which she believes is linked to the black mould in the bathroom wall, photos of which have been seen by The Daily Advertiser.

“I talk to my doctor weekly over it and I’m medicated because I can’t handle the stress. I’m always in tears, and I can’t seem to feel like I’m moving forward at all,” she said.

“I think we’ll die before they take us out of here. That’s how bad it feels.”

Ms Wood, who has been living in social housing for a decade, said her family had been approved for a transfer but was enduring an excruciating wait for another available property.

“I’m still waiting by the phone at the moment and this has been happening for the last six months. I’ve contacted [the department] over 40 times at least,” she said.

“They can’t leave me in here. They said they have temporary accommodation, but they’ve been saying that for a while and nothing’s happened.”

On the NSW social housing register there are 51,395 applicants across the state. In Wagga, 409 applicants are in housing limbo, each facing an estimated wait of two to five years.

A NSW government spokesman said there were 36 vacant properties in the Wagga local government area at the most recent count on December 22, some of which are “in the process of being renovated and re-let”.

Terry Coombes has owned his house in Ashmont for almost 40 years and is moved to tears when he speaks about his suburb.

He said he had contacted the NSW government multiple times over the past six months to raise his concerns about social housing falling into “disgusting” disrepair.

“I’m sick of it. It’s exactly the same. That was six weeks ago and nothing’s been done,” he said.

“There are a lot of people trying to do the right thing but the neighbourhood is being brought down by people who are anti-social.”

His partner Christine Norton is a former social housing tenant who said dealing with the NSW Department of Housing – as it was then known – was frustrating and often felt “pointless”.

Social housing is now overseen by the NSW Land and Housing Corporation, with tenants managed by the Department of Communities and Justice.

The NSW government allocated more than $350 million to new social housing projects across the state in this year’s budget, as well as more than $194.5 million to improving existing properties.

The Department of Communities and Justice and the Land and Housing Corporation did not respond directly to a questionabout improving the quality of living for Wagga social housing residents.

However, a NSW government spokesman said they were working to increase the number of social and affordable houses in the region.

“NSW Land and Housing Corporation currently has a number of projects in the pipeline in Wagga, including construction of a 10-unit complex in South Parade, due for completion by mid-2021, and construction of another four-unit complex at Spring Street due to commence in early 2021,” the spokesman said. Mr Burgess visits social housing on a regular basis, and said many residents were caught in a cycle of disadvantage that was hard to escape.

He said some support workers had stopped visiting certain “no-go zones” out of concern for their safety.

“Unless the state and federal governments make a big commitment to more social housing, I fear for what the future looks like,” Mr Burgess said. “We’ve got people homeless, we’ve got people going without food to pay rent in a rental market that’s overblown.”

The inflated cost of rent in Wagga has posed problems for Argyle Housing, which provides social and affordable housing to people in need.

The not-for-profit gets a government subsidy to help low-income earners afford to pay rent, but chief executive Wendy Middleton says that the market is still prohibitively expensive for most clients.

“For social housing tenants we have access to the private rental market, but that’s really, really tight in Wagga,” Ms Middleton said.

Argyle Housing is working with the government on the “Tolland Renewal project”, a multi-year plan to build more social houses and support services to revitalise the area.

Ms Middleton welcomed the project, saying she was “angry” the government had waited until 2020 to address Tolland’s social housing plight.

Much of the development will be concentrated in Tolland, which Ms Middleton described as one of the most troubled neighbourhoods in Wagga.

She said many of her Tolland clients are too afraid to leave their houses at night out of fear for their safety. 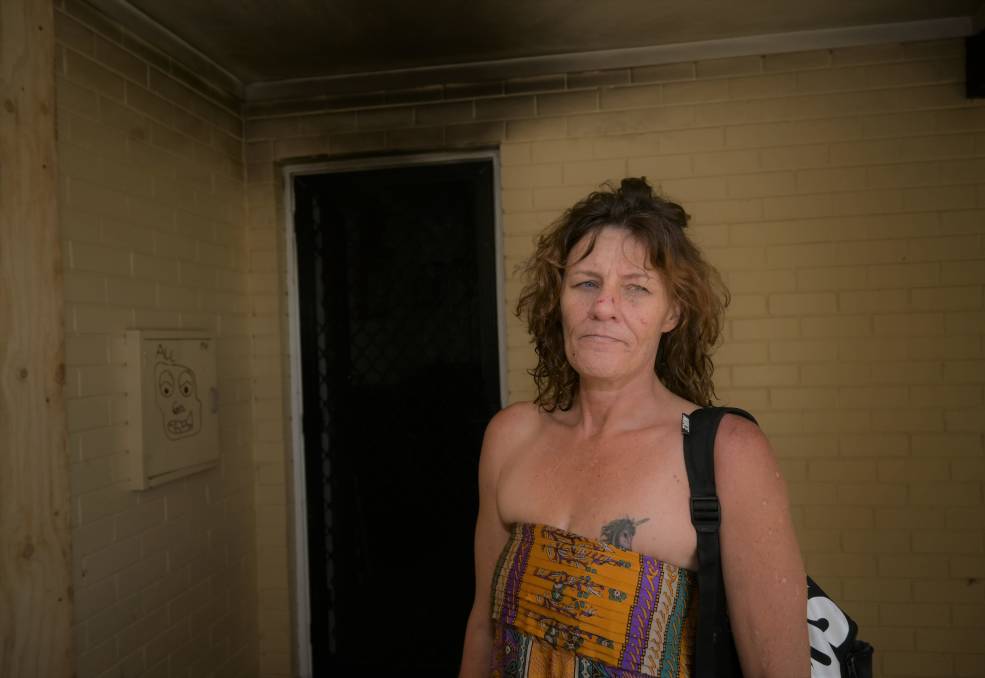 BURNT OUT: Kellie Egan woke up one day to find her house had been torched. She says such things are a fact of life for Bruce Street residents. Picture: Kenji Sato

Such is the case for Bruce Street resident Kellie Egan, who said she never goes to sleep any earlier than 6am due to the “gangs” that allegedly strike at night.

Ms Egan said the perpetrators would often disable the fuse box first, cutting off light to her block of units so that the residents were unable to defend themselves in the darkness.

While admitting to her own brushes with the law, she said she had grown to accept the violence and thefts committed against her as she now had nothing left to lose.

“They can only kill me,” she said.

“If you have something to live for you’d be worried about your life.”